After the run set by Boggy that included a drink stop the pack descened on the eating and drinking establishment.
A quick comment on the run Boggy somehow managed for the pack and one walker to finish together an amazing feat.
An ideal in Hash is that the runners and walkers to finish close together but in practise this rarely happens.
A good result.
The Tavern is obviouosly a very fine location for the Millennials and Generation Z set. The place was packed and with the regular trivia Tuesday night competition obviously extremely popular. The place was jumping and extremely noisy. Ales were being consumed at copious amounts and as out group of eleven settled in the sale of amber liquids rose dramatically.
For an old fart the noise was deafening and he found it hard to hear conversations. Never the less the atmosphere was convivial and everyone was having a bloody good time.
Tacos at $5 were very tasty and did the trick to keep the hunger pains at bay.
Trivia got under way and the Hash had two teams one lead by Y2KY Jelly. The other by Boggy.
There were two rounds of twenty questions plus some other music questions and putting names to faces.
The old fossil was amazed at the knowledge of the teams. Pepi Le Spew’s knowledge was outstanding on the team he was in. Not sure who the stars were in Team Two but they seemed to know most of the answers being smart arses.
The old fossil was absolutely bloody hopeless with his knowledge of the answers to questions. There was a huge generation gap for him in this regard. Next time how about some questions like: What was Frank Sinatras theme song? (My Way) or Who killed JFK? (L H Oswald) etc. etc. and he may have had a chance. Still I faired better with the NATO question than Arsey did with his geography: the ocean between Africa and Australia is the Ocean’s 11.
Anyway not sure if there was any prizes for winners but if there was our Hash Teams would have been right up there.
The fossil departed prior to any announcements as to the winners. He needed to get his shut eye.
A birthday cake made of chocolate puffs with sparklers atop was brought out for Boggy. A rousing chorus of Happy Birthday followed. It had to be very loud to be heard over the background noise of the others in attendance.
It was good to see Dragon BallzUp again also first timers Carl, Anthony and Aaron. Hope that they can become regulars and enjoy the camaraderie of the Hash.
It has been heard on the grapevine that after being kicked out of the establishment at 10pm four of the boys namely Derro, Boggy, Pepi and Barr went in search of another watering hole. One was found at Broadbeach and they duly carried on till 2am. That made it a very big night with I am sure resulted in some extremely sore heads in the morning.
All in all a great night for Boggy’s 40th.
BBags. 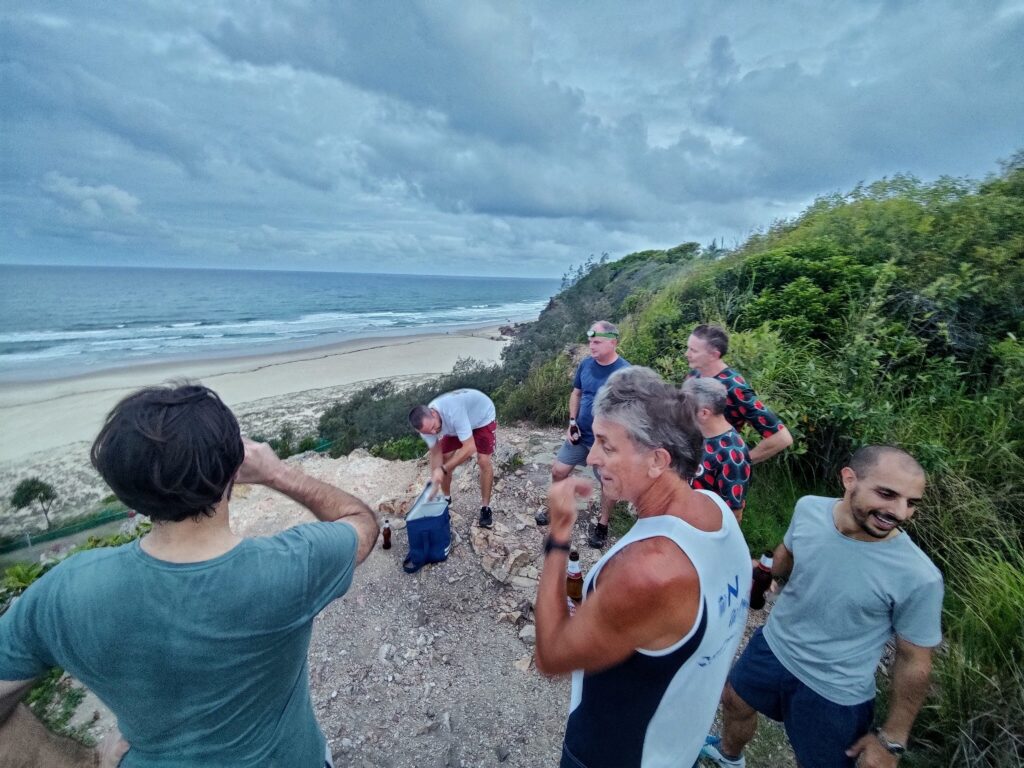